What if you are not as good as others?

What if you are not as cool as others?

What if you can’t command a presence like others?

What if you are not as pretty as others?

What if you are not as smart as others?

Have you also considered things such as;

What if you are you for you?

Do you know what it means to be you?

What if you are weird for a reason?

What if you have your own specialties?

Have you looked at the uncompromising personalities you have?

What if you are being loved just because you are you?

So I was thinking this morning and looking at things around, it all felt so overwhelming. Sometimes you just have to give yourself pep-talks and also trust that God has got you and has given you life for a reason.

There’s something I also want to talk about. Ok, so stay with me because I’m trying to put what I want to express in words.

So in this life there seems to be a way of life or so. Ok, another way to put it would be, there seems to be a way people are supposed to be or people should act and someone who deviates from this norm seems weird or different and doesn’t get the “approval” of the people. So it’s more like they are outcasts (Now I’m wondering if someone understands what I’m saying).

I feel like, the world should allow people be themselves without someone by any means telling them you are not normal or you are not doing it “the way it’s supposed to be done”, I mean people should express themselves. We are not all the same. I’m sure someone is like, is the world holding anyone? No and Yes at the same time. Somethings people think about or do which might just be them or their entire personality is being frowned upon (Ok, frowned is a strong word, more like not regarded or disliked), and so, the person strives to change their entire being or something that is just in them. Please this is different from changing for the better. I’m talking about people changing so others can accept them or relate with them. Now I can hear someone say it’s the person’s insecurities. Well, might be and most times, insecurities are as a result of comparison. The thing is, we are humans and no matter how strong we think we are to deflect people’s thoughts or opinions about us and so on, it still gets to us. That’s why we need constant encouragement. Where do you get yours from? I get mine from the word of God, family and friends. No one gets encouraged once in life concerning an issue. You need to be encouraged constantly to be strong, to be this, to be that, not to let things get to you. It’s kind of like a relief pill.

So I’ve talked and talked and now let me give an example. If someone is naturally uptight (like, seems too serious) for some reason, you hear things like, “lose up a bit” or “don’t you joke around?” or “you look too serious” and so on. So now the person hears this from almost everyone and feels the need to “loosen up a bit”. Well, define how a person is supposed to be please? Is there a standard? Has it ever occurred to anyone that people can naturally be like that? Doesn’t mean they are angry or even too serious but maybe that’s their normal personality, which of course, it’s not like yours. Yours could be more “lively”. But normal is normal. Their normal might be different from yours and because theirs is now seen as not OK, they make effort to “loosen up” and with such people, deep inside them, they feel stressed and always wonder if they come up as “uptight” to anyone they now meet and so instead of being themselves, they act weird or try too hard not to act weird, yet still acting socially awkward. So I know I might have confused a few. I just hope I made sense and some people out there can understand. This is just an example. There are other examples, relating to school, style, sense of taste in anything, etc.

I just want to say, let’s stop comparison (Trust me, it can be almost impossible) and let’s not be afraid to be us. Also, know who you are. It’s very important. It makes you stand firm and not compromise whatever position or stand or decision you decide or have decided to take. Remember, if it seems like no one is on your side, God has got you! You just have to recognize that. So long as what you do doesn’t offend God or isn’t contrary to His words, then take your stand and be you! 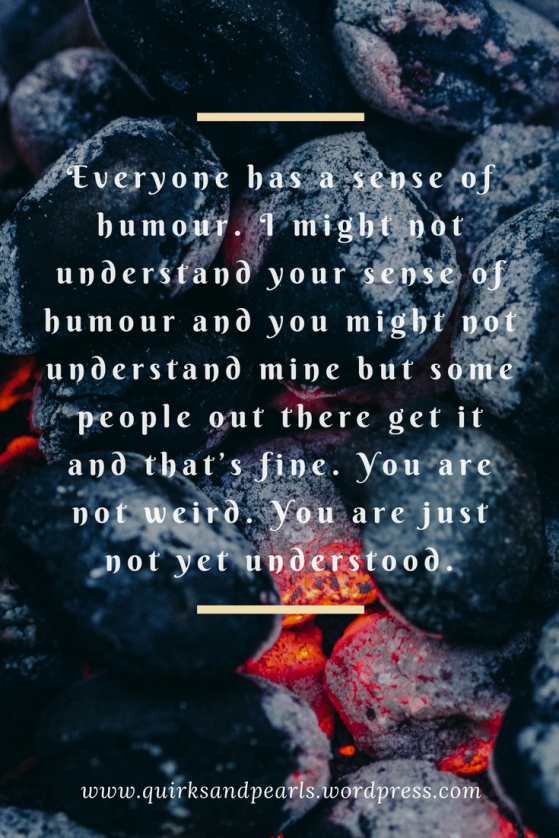 Have you seen my last post? It’s the first series of ViewPoint and it’s on polygamy. Do check it out here.

I'm Odinakachukwu Ndukwe, but just call me Nakas. I love music and I like to consider myself a listener. This blog is a way of sharing what's on my mind. I hope you stick around, enjoy!!